I was recently inspired by a tweet where a Grade 4 class was asked what they would like to learn.

On my weekends the inevitable question arose from my six year old daughter “Mummy, what can we do?”. For the first time in a while I had a well planned answer for her. She had asked recently twice what it is that I did as a job and I very loosely explained it but decided that this was the prime opportunity to kill three birds with one stone – give her a good understand of some of what I do, fill up an hour of her time and find out what she would like to learn.

As an early concluding statement I was very happy with the results.

For those interested here are the steps that I took:

So take a look at some of the other shots of work in progress and some of the outcomes. Lastly there is a mid sprint opinion on how the exercise was going. 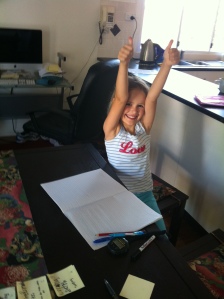 5 thoughts on “A six year old’s one hour sprint”