The Smithsonian is the world’s largest museum and research complex with hundreds of affiliated museums.

The Stoosonian is much the same but switch up museum with people and thought leaders. It could be the collective noun for people focussed on building such a network focussed on leadership in the same guise that the Agile Alliance crowd marketed the Agile Manifesto.

If you haven’t heard of Stoos then you might have been on holidays and not reading or following the twitter streams in the Agile community. In just one week I heard about it from three separate sources so the community is certainly abuzz. And I hope rightly so.

So what is Stoos? Take a look at their opening statement at http://www.stoosnetwork.org

Reflecting on leadership in organizations today, we find ourselves in a bit of a mess. We see reliance on linear, mechanistic thinking, companies focusing more on stock price than delighting customers, and knowledge workers whose voices are ignored by the bosses who direct them. All these factors are reflected in the current economic crisis, increased inequity, bankruptcies and widespread disillusionment.

There has to be a better way.

In January 2012, a diverse group of twenty one people including senior executives, business strategists, managers, academics, and lean/agile development practitioners from four continents, met in Stoos, Switzerland. We believe that we uncovered some of the common characteristics of that better way. 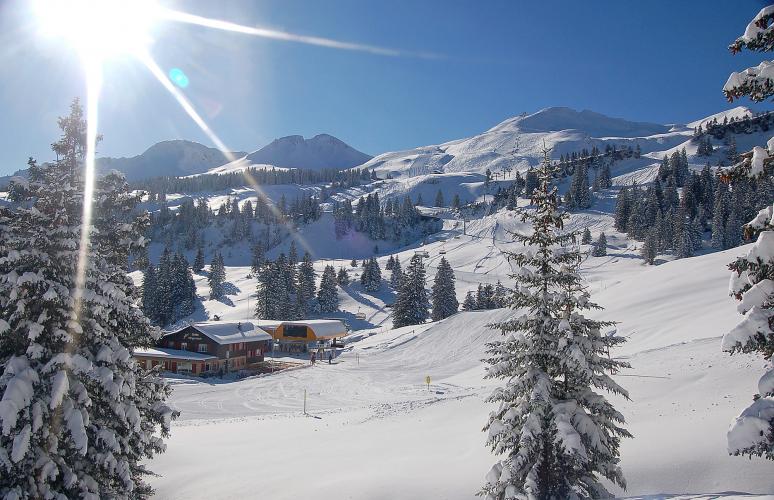 From the stoos network page there is a myriad of information that can be found from the closed sessions that were held. A good portion of content has started being posted on LinkedIn and on a variety of blogs and other mediums including #stoos on twitter. In fact, the wide variety of mediums does mean you have the traverse around a bit to gleam everything that is being talked about but without a doubt the social stream is incredibly active.

I spent a few nights taking everything in and having a look around. The hype from colleagues lived up to my initial delve and then I began to test the waters on a few questions that I had. My first concern had been the target Stakeholder list. Now let me start that I am highly impressed that the group took the effort to do this list, debate it and then re-evaluate it. But two things jumped out on that list (and a third now that I have received some responses):

The reason why I was concerned in particular about the C-section being so low is that every time I have done an Agile transformation within an organisation it absolutely had to have C-section level buy-in. This wasn’t an optional element. It was critical to success. Without C-section level buy-in teams were left to do Agile in stealth. Sure they worked better than before but there was a upper bound of roadblocks that endlessly re-0ccured and never got addressed because there was no organisational focus on being Agile. Culture of the team subtly changed but without C-section buy-in the culture of the organisation would never change.

This is critical to not miss. Agile, to get the benefit, requires cultural transformation. The Leadership problem is no different – in fact it is more often then not Leadership that drives culture. I’m not just talking about first line managers but also middle managers, CIOs and CEOs.

I then did a deep dive at the problem analysis done. 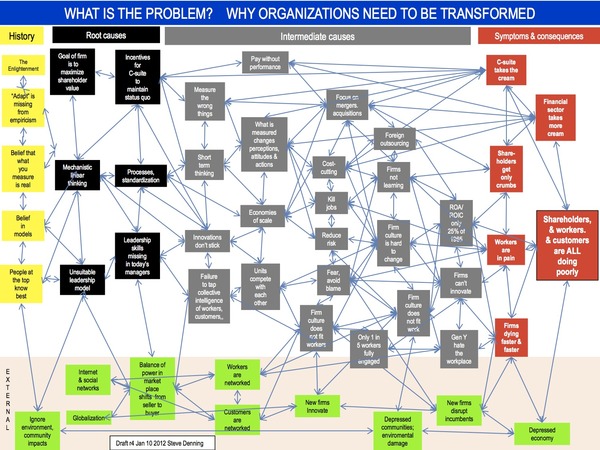 Again I want to take a moment and congratulate the Stoos team on the job they did on generating this starting diagram. I would imagine they spent a few hours on this and as a starting map I think it covers most of the key points. To get it past 80/20 right it would have likely taken the whole two days.

If you take a look at the top two (not necessarily by priority) root causes you see shareholders and C-section management as the cause.

So my concern is that without doing something to address those two root causes that all this effort might be in vain.

Side note: would love to see the 5 whys applied to the root causes because they aren’t base root – eg Why are leadership skills missing in today’s managers?

Now I posed the question of C-section being non targeted in the twitter stream and was given a couple of nice links which is great information and a step in the right direction but again isn’t the root cause. The root cause as in the article is lack of education – and who do we need to educate? – the C-section, shareholders, and future to-be C-managers. Which is why I am happy that educators are high on the target audience. So there is hope, but maybe not in my lifetime.

What I love about the Stoos community thus far:

As a test I asked a friend of mine who leads a team of ten about their leadership.

Do you think you are a leader or a manager?
A little of both. More detail then given.

How do you think your team perceives you – more as a leader or a manager?
Probably a manager.

Why did you go into management as a field?
For the money.

Not because you enjoy working with people?
No. I was smart, it was expected of me to progress that way.

How much time do you spend learning of new leadership and management techniques?
None. I have no time for that sort of stuff. I am too busy.

So if you weren’t so busy you would spend some time learning how to be a better leader/manager?
Probably not.

I could have continued going on to find the root cause but at that time my friend was starting to get the picture that I wasn’t playing nicely. Getting honest answers on this is going to be hard but we need to get some broad understanding (ie real metrics lean start-up style) to make sure we are going to make a dent in this massive global problem.

So lastly I want to say thank-you to the Stoos group for having the guts to tackle this and to make a great start on it. I am pleased that the group has such a diverse set of thinkers but would love to see a few other thoughtleaders included in the list – my pick would be someone who represents motivation (eg Dan Pink), someone for crowdscourcing (eg Dan Tapscott) and someone from the field of Neuroscience (to be honest Peter Burrows wouldn’t be so bad as he conceptually understands Agile and more importantly has some interesting team dynamic theories).

Keep it up and don’t take this blog as a big rant of criticism – the good certainly way outweighs the bad.