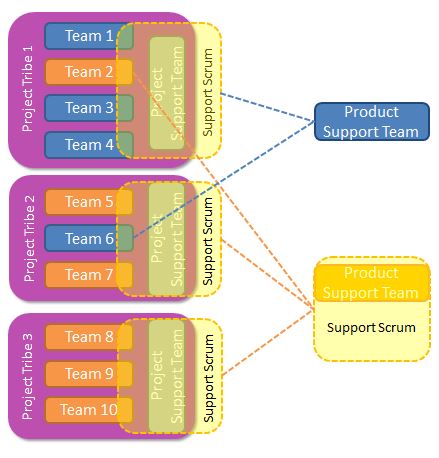 Scrum as implemented within teams is something that many of us have been doing for a while. It isn’t a simple implementation, but we have done it for over a decade. As teams begin to invest in applying Scrum at scale, the complicated quickly becomes complex. Methods such as LeSS, Enterprise Scrum, SAFe, DAD and Spotify are good examples of where people have aimed to return this complex set of activities back to complicated.

But they are all missing the realisation of a very simple concept, that all people and teams are not created equal. Sure there is a vast appreciation in these methods of the concept of teams – teams that are autonomous, fully empowered to work with their Product Owner to deliver customer value. These teams, often known as feature teams, pull items of larger work off a portfolio backlog, a backlog recognised to often be owned by someone further up the organisational chain of decision making.

However, where are the technical leaders in this? Where are the managers, be it project managers, or people leaders? Some would argue that in a truly agile organisation such roles shouldn’t exist, and maybe a more lean or autonomous organisation would seek ways to immediately remove these roles. But in a transformation, when so much is in flux, when there are already so many risks of change around, maybe there is another way.

What could the alternative be? What if we could be more tolerant and respect people’s roles and the value that they could provide in these roles?

This blog post is dedicated to such an approach and seeks to discover and highlight the concept of team types.

The first team type is the one that we all know best. This is the team that does Kanban or Scrum, or whatever else in order to deliver value to customers. This type of team commonly works off a Product Owned backlog.

This team should also be accountable for the outcomes that they deliver to production – work is not considered complete until the benefits have been realised through hypothesis validation, and any production incidents are also owned and resolved by this team. In simple terms, rather than passing off their problem to another group who only do fail and fix, this team “fixes whatever problems it may create”. In this respect, the team will have a clear desire on good quality software and reducing technical debt because they will also own the maintainability of the code. If technical debt or refactoring is ignored by the Product Owner, they will acutely feel the pain of it further down the line and consequently better appreciate the balance of feature delivery with quality.

There are three points that need to be highlighted for feature delivery teams:

Not necessarily applicable in all organisations, if the Agile transformation hasn’t tackled removal of the term “Project”, or if it simply makes more sense to bundle together like business goals that cross cut multiple products, then the project support team is an important team to recognise for the value that it provides.

Common activities that this team will own include:

There are three points that need to be highlighted for the Project Support Team:

In the duel relationship with the Project Support Team, the Product Support Team is an important group of people who own the multi-team related risks, issues and release activities related to the Product (sometimes considered a platform or channel).

Common activities that this team will own include:

In a number of cases, the greater the amount of automation that this team or the feature delivery teams can build in to reduce the above activities, the better – especially when it comes to release and testing automation. Note that I haven’t even mentioned production acceptance regression testing as I do fully expect the feature delivery teams to build up this suite.

In SAFe, this is where the Release Train Engineer and the Architecture related elements may fit in, but I don’t really see this team as delivering architectural features, they are responsible for product delivery capability.

There are three points that need to be highlighted for the Product Support Team:

I understand that many people will read this blog and go “that’s not very Agile”, but the reality is that a transformation doesn’t happen overnight and unless you have a horde of Agile Coaches going across massive 30,000 people, you are going to have to pick and choose battles, with those battles often not immediately targeting both governance, finance and human resources sections of the organisation.

This is a way of an intermediary step until you may be ready to transform systemic organisationally wide dysfunctions.

One thought on “Scaling Scrum: A new consideration of team types”