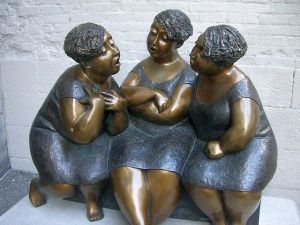 When my team gets together as a group of coaches it is always an interesting few days. I say this in complete honesty. I find the conversations stimulating. I find the group passion contagious.

But I know that some don’t find it that way. Sensing the frustration I asked a colleague what in particular they disliked. I was expecting them to say that they found the conversations were too much an argument and less a constructive debate. What I did find instead is that they were frustrated by the lack of actions after large blocks of conversations.

I likened the scenario to facilitating a Daily Standup. Sometimes in Daily Standups the conversation will get off the standard three questions. Often this will end quickly, but occasionally the conversation extends. I find that the balancing act that a Scrum Master or Iteration Manager has to perform one of the most intriguing and difficult aspects of the role. You want to get the value out of the discussion but you don’t want the majority to be bored. Some Scrum Masters offline the conversation too quickly and don’t consequently get the value out of the activity because the real problems and solutions aren’t coming out. Some take too long to offline the conversation and the standup consequently fails to meet expectations which either leads to thirty minute standups or the practise getting dropped because it isn’t perceived as valuable.

For me, if the conversation in the Daily Standup moves slightly away I will let it go for a little while but keep a close eye on the body language of those not involved in the discussion. I will also be constantly assessing in my head whether the conversation is progressing or is stalled. If it is stalled I will re-direct, but if it is moving forward and language indicates an acceptance of the discussion then I won’t halt it. I will be conscious of time. I will be conscious of relevance. Do all conversations have actions? No. Should they? I don’t believe so.

Sometimes conversations are about understanding and not actions. But they need to be valuable. A valuable conversation may result in actions or decisions. But a valuable conversation can be about a common understanding. Take a look at the ladder of inference. These discussions are about aligning beliefs. Unless we align beliefs then we cannot progress into the actionable state. Conversations may align beliefs and create actions, but action doesn’t have to be an immediate outcome for the conversation to be valuable. An action can be a long term change in behaviour as a result of a belief change.

To have changed beliefs is the harder activity to do. It takes longer and can appear to be going nowhere. It is like the tightrope you walk when you facilitate a Daily Standup. But investing in it is the only way that a team will align with a common purpose and truly own the change.